Whale watch The cost of gas in Europe jumped above $2400, gold fell in price The dollar index (DXY) is rising again Conflict over Taiwan could have unfortunate consequences for the U.S. economy Crisis on the Rhine
← Back to Market News

U.S. treasury yields remain trendless as the market tries to price in the next major directional move in rates.

The 30- and five-year yields have held key support levels in recent sessions. And the 10-year yield has pulled back within its prior range after a potential failed breakdown. 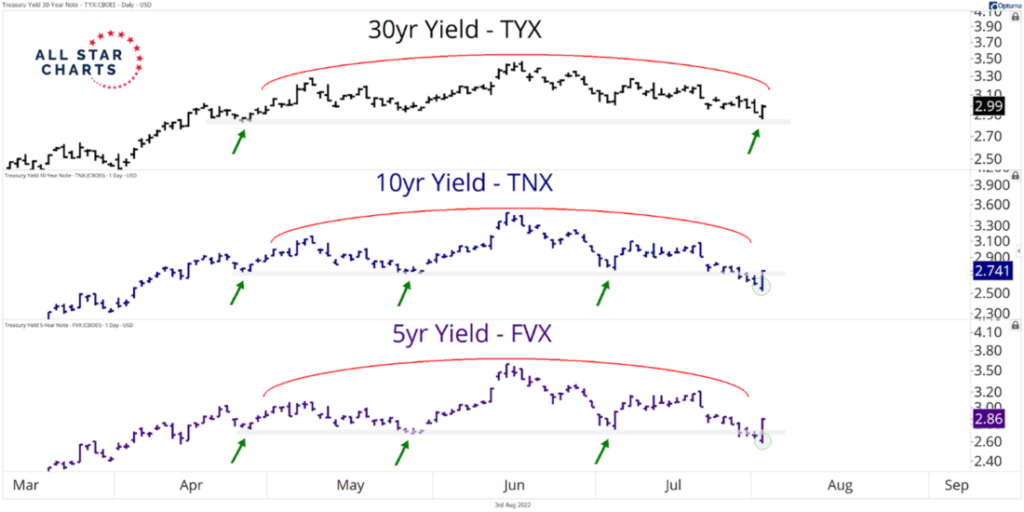 Whether these levels hold in the coming weeks could have broad market implications. Cyclical sectors and commodities could benefit if and when rates continue to trend higher, while growth and long-duration assets would most likely perform the best if yields decline.

Stocks outside of the U.S. have endured severe damage over the past year. As a result, we have seen a growing number of international indexes flirt with and even violate critical levels of support. The chart below tells the story.

On the one hand, the MSCI Netherlands ETF (EWN) has successfully held above its pre-financial crisis highs, while the MSCI Canada ETF (EWC) is trying to hook higher and repair the damage after violating its respective former highs.

Bulls want to see prices dig in here and make a sustained upside resolution. However, if they turn lower, it would be a bearish development for global equities.